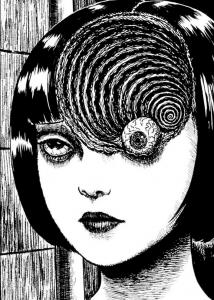 Our image, taken from Junji Ito’s horror manga Uzumaki, demonstrates an abstract yet personalized model of time: that of isolated incidents serving as grounding points from which the rest of our perception of time emerges. Our view of our own pasts is filtered through the context of key moments, often images, which we return to when confronted with similar images. This is particularly true with images tied to strong emotions; in the case of our image, the emotions conjured are fear, confusion, and fascination, with the sight of manga panel for one who has previously read the story in question resulting in mental transportation back to the initial reading thereof. From this transportation, surrounding memories pour forth, from both before and after the initial reading. This, in turn, turns in an ebbing and flowing tide of memory. Essentially, key images serve as anchors of memory in the relentlessly flowing river of time. These anchors are always the most readily accessible and perceptible points in the river, but the space in between them becomes more readily grasped through grabbing onto these vital reference points. A possible explanation for this phenomenon comes from a study at Melbourne University in which a link between image perception and personality was found. Because memory has a direct effect on personality we can assume that memory and image perception are closely related as well. This could explain why our perception/memory of time is associated with individual images.

Oftentimes, an image of one defining moment in a specific series of events is the information through which the memory is remembered. When the image is conjured in the mind, memories surround it. This instantaneous remembrance leads to re-experiencing the emotion associated with those memories. The process can also happen retroactively. For example, one is asked to remember their first injury and the image of a bruised knee in a specific place, at a specific moment in life, comes to mind instantly. That image not only carries memory and emotion, but it illustrates the way we measure our lives. Our lifetimes, our “time” on earth, is then defined by a series or even cluster of images. This doesn’t necessarily mean the images are perceived by us linearly, but it shows we have the power to remember specific moments in time, by associating those moments with an image. In that same way, a lifetime is commonly referred to as a series of images, like the “life flashed before my eyes” trope in near death experiences. When faced with death, the individual sees a carousel of images from birth to near death. Because humans in modern societies mostly perceive time as linear, these images are usually also perceived as sequential – from birth to death. Either way, because images play such an important role in our development, a person’s time on earth can be measured with images. There is a correlation between the tropes of the near death experience and fantasy proneness, but this only serves to support the idea that the “lifetime” is perhaps reliant on perception. If one is fantasy-prone, they may be more likely to experience a manifestation of their time on earth via a series of images. Our interpretation suggests that these near-death images could even potentially be imagined, but nevertheless measure or act as anchors of time.

The connection between time and memory is inherent in all humans. Just as John Eckert Jr. argued on the equivocation of memory and its attachment to moments of time it is immediately evidenced by the example of Uzumaki and the emotions, along with attached memories, that this manga holds in one of the authors of this project’s mind wherein a simple image conjurns a wealth of emotional and contextual memory. This phenomenon can be tested by you, the reader after you are done reading this short essay; maybe in five minutes, or an hour, or a few days, look at our selected panel from Uzamaki and see if this image brings back your memory of the content of this essay. Then see if the memory of this essay connects to the rest of the day spent following or preceding. See how it can be used as a mental bookmark from which the surrounding memories can be traced. Allow yourself to connect memory and time.